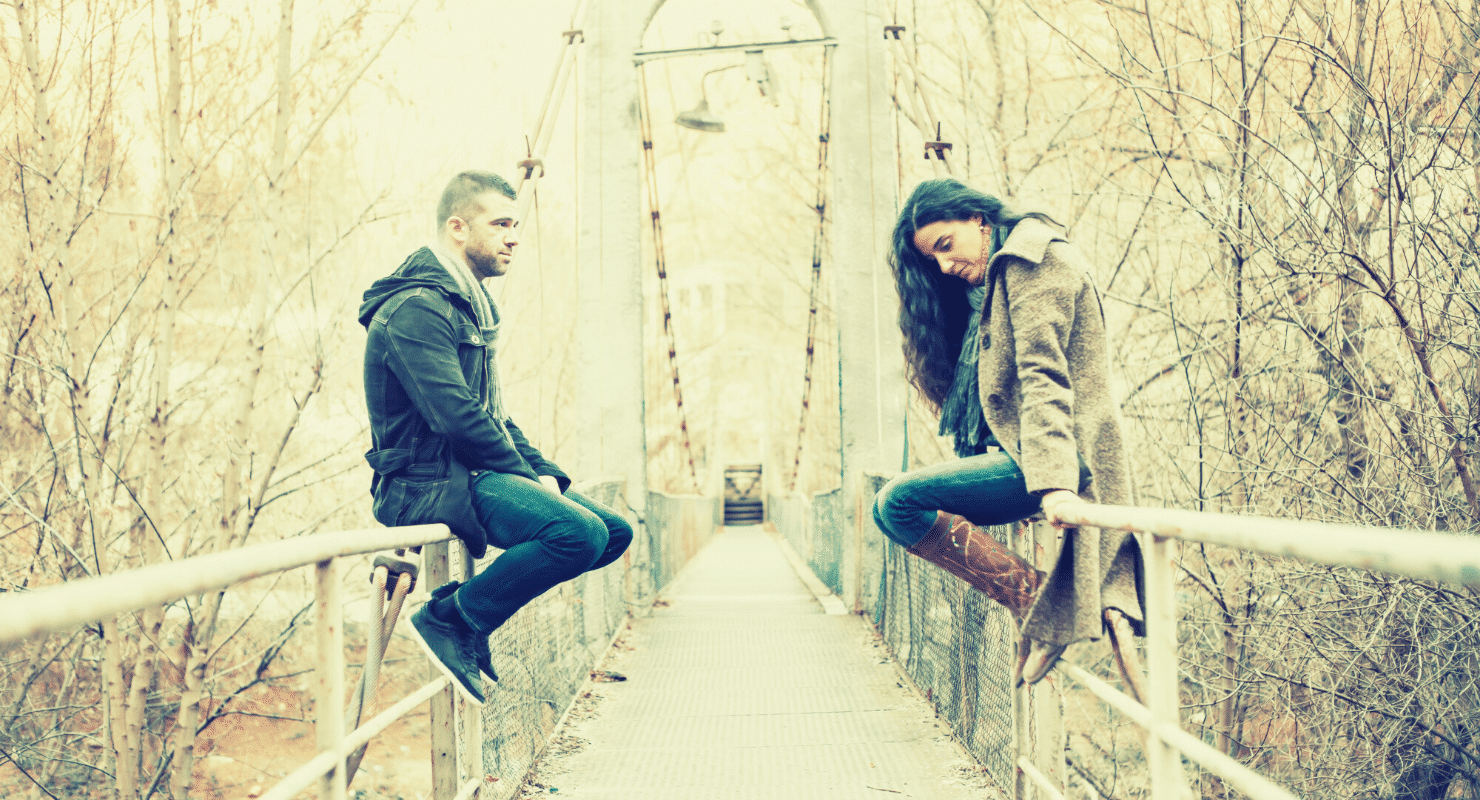 The Cassandra Syndrome is another effort in the continuing attempt to describe the struggle of the neurotypical partner (NT) who too often can’t get validation from their neurodiverse (formerly Asperger’s Syndrome) partner, extended family, or helping professionals.

In Greek mythology, the God Apollo bestowed upon Cassandra the supernatural gift to foresee the future.  He did so in an effort to seduce her.

However, Cassandra was not interested in being the consort of a God, so she rejected his advances. Apollo allowed her to keep her prophetic gift…but cursed her with the burden of never being believed.

Although Cassandra could reliably predict the future and could warn of impending danger, no one believed her.  She was mocked and marginalized…seen as little more than crazed and delusional.

Cassandra’s life, after rejecting Apollo was never the same. Despite Cassandra’s predictive skill, her truth was never accepted.

Cassandra Syndrome has emerged as the term used to describe the psychological and emotional distress experienced by a neurotypical woman married to a neurodiverse man. Support for their truth is elusive as well.

Neurotypical spouses are often plagued by ambivalence, confusion, and turmoil. There are few social supports to help neurotypical spouses grapple with their experience of being married to a neurodiverse individual…and vice versa.

Complicating this issue is the poor understanding that friends, family, and even helping professionals have about the intimate life of the neurotypical spouse.

Several catch-all terms have been recruited to describe the neurotypical spousal experience. About 20 years ago, the name Cassandra Syndrome was floated.

A challenge for the newly emerging Neurodiversity Rights Movement will be to reconcile their critique of the “hegemony of normalcy” with the real problems that present in an neurodiverse/neurotypical marriage, particularly for the neurotypical partner who is also a victim of the oppressive normative paradigm.

Many objected that we were already awash with too many “syndromes” and the alternate term Cassandra Phenomenon was proposed, but never gained traction.

Emotional Deprivation Disorder is another term that has been offered. EDD is a syndrome (a grouping of symptoms) that results from a lack of authentic affirmation and emotional strengthening by a significant other.

The reason this term is confusing is that it was initially coined by a Dutch Catholic psychiatrist in the 1950s, Dr. Anna Terruwe. She originally posited that emotional deprivation in early life fueled an adult anxiety disorder.

Since we’re talking about marriage and not early life, it’s not a useful term, although it was probably seized upon because it sure sounded like one.

Although if you’ve had an emotionally deprived childhood, resulting in an Anxious Attachment Style, and then married a neurodivergent, your early history could be a force-multiplier for marital problems.

Some therapists feel that the undiagnosed neurodivergent relationship inadvertently creates conditions of an unusual variant of complex trauma (C-PTSD). The neurotypical partner does tend to meet some of the C-PTSD criteria:

Some of the most critical trauma symptoms, nightmares, exaggerated startle reactions, and flashbacks may also be present in the undiagnosed Neurodiverse Marriage.

However, the issues of the neurotypical partner are sufficiently unique that it merits careful study independent of conventional classification. There is typically no singular “traumatic event.” There is, instead, an ongoing traumatic context; an ongoing poverty of intimacy coupled with poor communication. The struggle of the neurotypical partner is not one of being deliberately afflicted. It’s more like being inadvertently deprived.

I think neurodiverse thought leader Maxine Aston nailed it when she proposed the term Affective Deprivation Disorder (AfDD) with, as you can see, a nod to the Cassandra Syndrome (“the other half of Asperger’s Syndrome…the new Cassandra Workshop”). I like how Maxine describes her conception of AfDD:

Unlike other Axis and corresponding to the proposed category of Relational Disorders, AfDD is not an enduring disorder of the self stemming from childhood deprivation, emotional trauma, or congenital defect, but rather is a relationship-dependent condition generated by the operation of low emotional-intelligence or alexithymia (lack of emotional awareness) in one or both partners of a relationship.

Further, the symptoms of AfDD are more likely than individual disorders to be responsive to therapeutic intervention or a change in relationship status. In fact, the very knowledge of the primary condition underlying the relational imbalance can in and of itself be healing. Since AfDD is a consequence of individuals’ relational dynamics, it is possible to find ways to reduce the level of disorder by increasing awareness and interactional skills.

Relationships can work if both partners work together to understand their differences and develop a better way of communicating, showing emotional expression and loving that works for both of them. Maxine Aston.

Since Maxine concurs, and in the interest of not confusing our gentle readers, I will focus on the more user-friendly term Cassandra Syndrome. What’s one more little syndrome between friends?

Something important is going on with the frustrated neurotypical partner. As you will soon learn, it’s a two-pronged attachment injury. But I think our thought leaders are overthinking it a wee bit.

The uncomfortable core of the Cassandra Syndrome

I like Maxine’s core ideas, although Affective Deprivation Disorder may be a mouthful, and the term “disorder” may be offensive to some.

She dismisses the idea of a childhood wound (although I think that it could be an aggravating factor) and focuses on present-day relational disconnection.

Maxine describes an intimate relationship that is being actively thwarted by alexithymia or low emotional awareness. But she offers real hope for Neurodiverse Couples. By increasing your interpersonal skills, you can repair the relationship.

In other words, once you learn that you’re in an neurodivergent/neurotypical relationship and you are both willing to work on it, good science-based couples therapy can help. Interestingly, what these thought leaders are all trying to convey is the interlocking sense of isolation Neurodiverse Couples experience when they get poor social support… and really bad couples therapy.

The role bad therapy plays in the Cassandra Syndrome

It’s been my experience that many individually oriented therapists and couples therapists are utterly oblivious to the idea of Neurodiversity, but that is rapidly beginning to change.

Living with a neurodivergent partner with no external support creates intense internal conflict, poor self-esteem, frustration, rage, anxiety, depression, and a constellation of other symptoms that thought leaders described twenty years ago as Cassandra Phenomenon or Cassandra Syndrome.

Cassandra was a mythological character who was given the gift to foresee the future, along with the curse that no one would ever believe her. Interestingly, they chose this term because the epicenter of the problem is not in the speaker of the truth. Cassandra knows what’s up. The problem is in the extended family and therapists…who do not believe her.

Often it is only those closest to the individual with Asperger syndrome, such as their parents and partners, who are truly aware of the problems the syndrome can cause.

By the time the couple gets to the counseling room, the NT partner may appear quite desperate and frustrated by the difficulties and strain, the relationship has placed on her.

She will be saying things like ‘He can’t talk about his feelings. He treats me like an object he is obsessed with routine. He constantly accuses me of criticizing him.’ Finally, a thought that most NT women seem to express is, ‘I think I am going mad!’ Maxine Aston.

To me, the most important aspect of this term…is that the problem is, once again, a lack of emotional awareness. Only this time with the neurotypical's extended family and helping professionals.

Here is the irony. The “hegemony of normalcy” is now oppressing its own kind. The neurotypical spouse is neither understood by their neurodivergent partner…or by family and helping professionals who could reasonably be expected to be empathetic.

Although awareness is increasing thanks to organizations like AANE, most couples therapists are unaware of the traumatic impact of the communication challenges inherent in Neurodiverse Relationships.

Untrained therapists are readily deceived by “… a man who is quite likely to be very intelligent and hold down a very responsible job; announce that he really does not understand why she is never happy,” Maxine Aston.

The Cassandra Syndrome underscores the existential loneliness of the neurotypical partner. One of my clients described her husband this way:

By all outside measures, my husband is a success. He’s a multi-millionaire, deeply respected in his field. He has a vast command of many different forms of knowledge. People see his quirky sense of humor. But they didn’t see the 7 months he spent focusing on his humorous routines as a “special project.”  After a party, on the drive home, this all exhausts him. He believes that he has a responsibility to pass as neurotypical…and when the show is over, there is precious little left over for me or the kids.

It’s typical for Neurodiverse Couples like this to enter couples therapy because of a lack of emotional connection and poor communication. The neurotypical had certain conventional expectations that marriage would include a mutual sharing of thoughts and feelings, and conversation about important topics would be relatively easy and effortless. 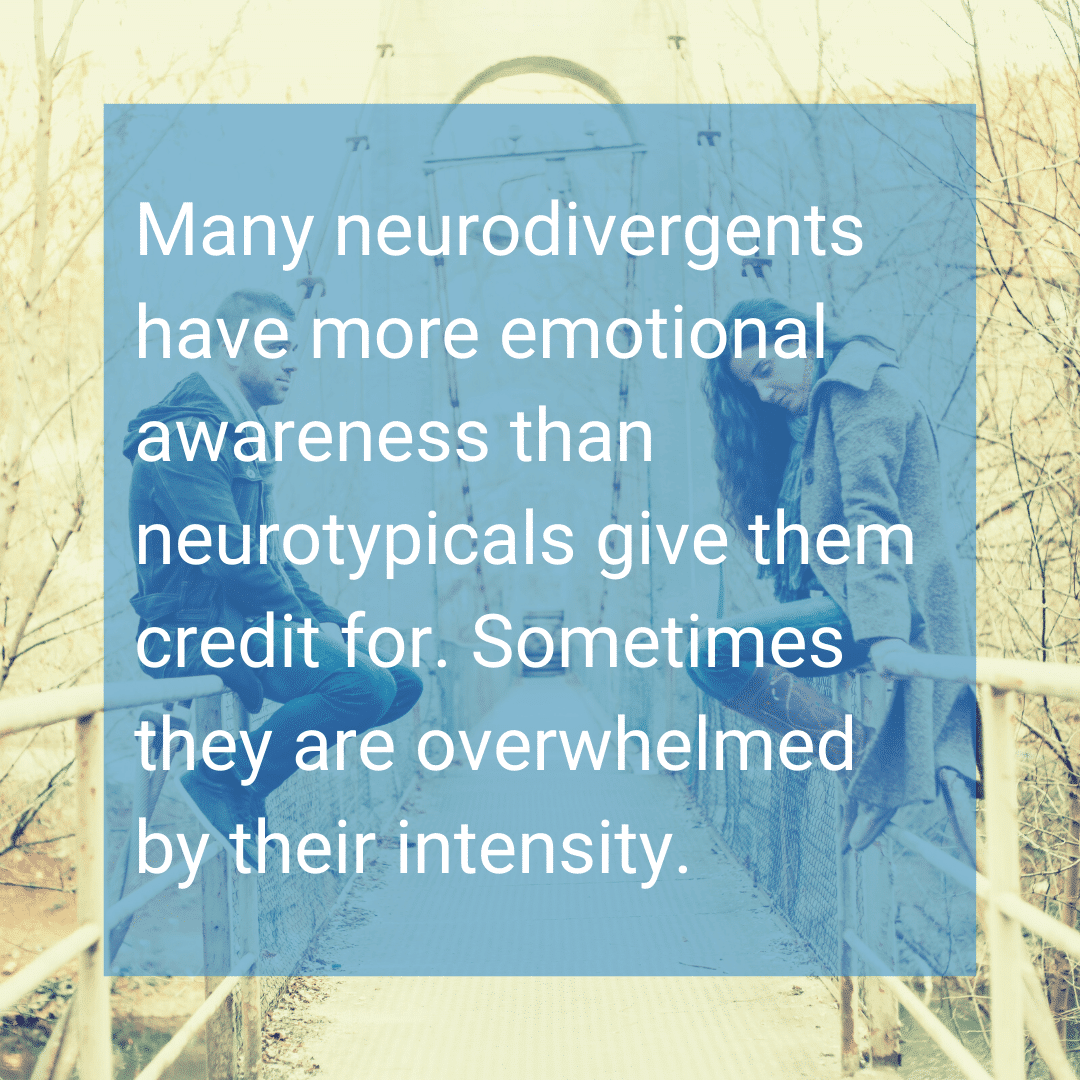 Expectations and emotional needs clash. The neurodivergent partner may have an entirely different set of expectations, and a contrary sense of emotional closeness.

The Cassandra Syndrome describes a mismatch of needs and expectations arising from interlocking misunderstandings that are typical for Neurodiverse Couples.

Many neurodivergents have more emotional awareness than neurotypicals give them credit for. Sometimes they are overwhelmed by their intensity.

Some neurodivergents, who find eventually find good couples therapy, disclose that they live with a constant overload of feelings, and they go through their days in a hyper-aroused state for much of the time. These marriages need to build dialogic skills that offer safety.

And some neurodivergents are overwhelmed by their thoughts and struggle to be able to reach out beyond themselves.

A well-trained couples therapist will carefully assess what symptoms are causing the most distress and how this couple can collaborate in therapy to find ways to curb the Cassandra Syndrome. And that’s the promise of science-based couples therapy for treating Neurodiverse Couples.

Are you in a Neurodivergent marriage?

Aston, Maxine. (2001) The Other Half of Asperger syndrome. London. The National Autistic Society.