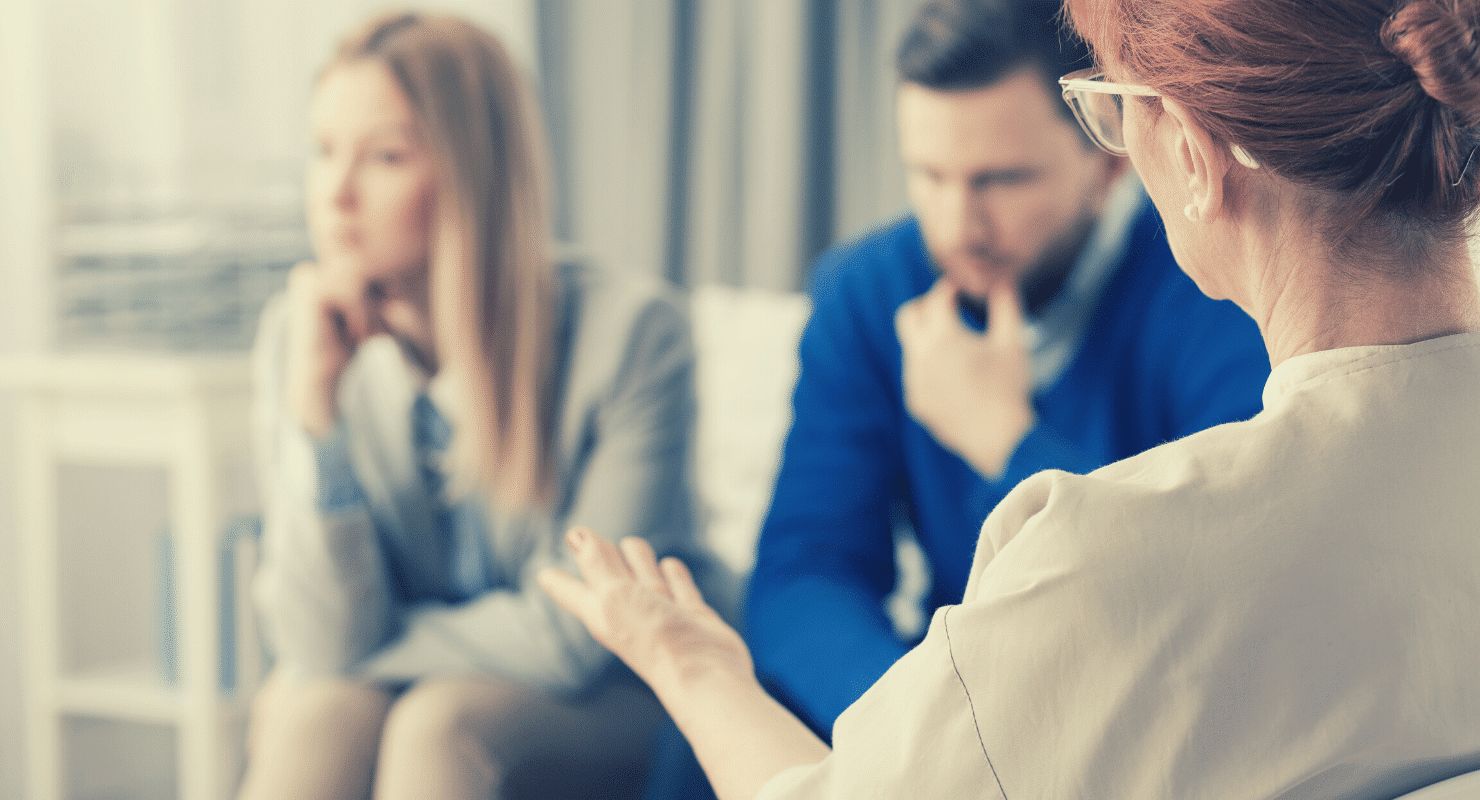 What is discernment counseling?

Discernment counseling is a therapeutic approach designed for those who are struggling with the decision about whether to stay in a marriage, divorce, or wait and do nothing.

It's sometimes called "pre divorce counseling" but if one of you is definite that you want a divorce, no question about it, this form of counseling isn't for you. If one of you is seriously contemplating divorce, or are a couple on the brink, this isn't the time to "work on the marriage."

That time has passed.

But if you have lingering doubts about whether getting divorced is an intelligent move, you'll want to slow down and give it some serious thought.

Have a place where the professional sees both of you short term, individually and briefly together. It's for mixed agenda couples deciding to divorce or not.

Divorce is an impactful decision. It's a decision only each of you can make, and it's an important one.  In other words, it is a time-limited approach to help you to judge your marital options well, especially if you are seriously contemplating divorce.

Make sure that marriage counseling isn’t a waste of your time and money. But also make sure you aren't jumping the gun and getting an unnecessary divorce.

Discernment Counseling is designed for those who are actively doubtful that marital therapy will do any good.

Who goes to discernment counseling?

The leaning out partner's perspective

You may be looking to “get out easy” without being the one everyone “blames” for the divorce or causing even more pain.

If you did counseling before, you may have “agreed” hardheartedly. Secretly, you were utterly convinced that “nothing would help.” Or you went to someone you thought was an expert and it went horribly. Or you might have even mentioned marriage counseling in the past and the idea was rejected.

You could be involved in an undisclosed, ongoing extra-marital affair that you aren't willing to reveal or to give up.

Or are so depressed, you can't do therapy well. The divorce process is equally overwhelming, too. Or you want a no-fault divorce but are getting no cooperation. Or there are children involved and you are concerned how a divorce might impact them.

This might not be the first time you've thought about leaving.

But at this point you just can't continue the way things are, not for your husband or wife, not for anybody. Not even if there are children involved. You are in so much pain, you believe divorce may be only solution.

You have a story to tell.

Pain, frustration. Perhaps that story hasn't been taken seriously, until now. Not even now. It's about your unhappiness. The efforts you put in to make things work, and how it didn't help.

The lonely feelings you've been covering up. How invisible you feel. And how the things you've done to try to make things better between you have left you've been even more hopeless. You just want to give up.

There's no air in the room when you are together. Vacations suck. You feel like a fake staying. And you want a life. Heck, you deserve a life. The passion is gone (if it ever was there) and you just don't believe in keeping up appearances.

BUT DIVORCE? THAT'S A BIG STEP

You'd like a place to really have the space to talk it out with somebody. To even find the words to explain it to your spouse...who may be totally freaked out. Or so angry you can't say "pass the salt" without an argument. You may not go for more than one session. That's fine. Each session stands on its own.  We aren't there to "convince" you to stay. Just to slow you down and help you get clarity about what you want to do and why.

It's not marriage counseling, either. We aren't going to try to change around what makes you both so unhappy.

If you decide to go that route, that's for later. That's one of three choices you'll have to make. For now, you want to know which direction to go, with greater clarity and confidence.

But let's be honest:  If you don't explore your own contributions to the problems in the marriage, you're just likely to repeat it. 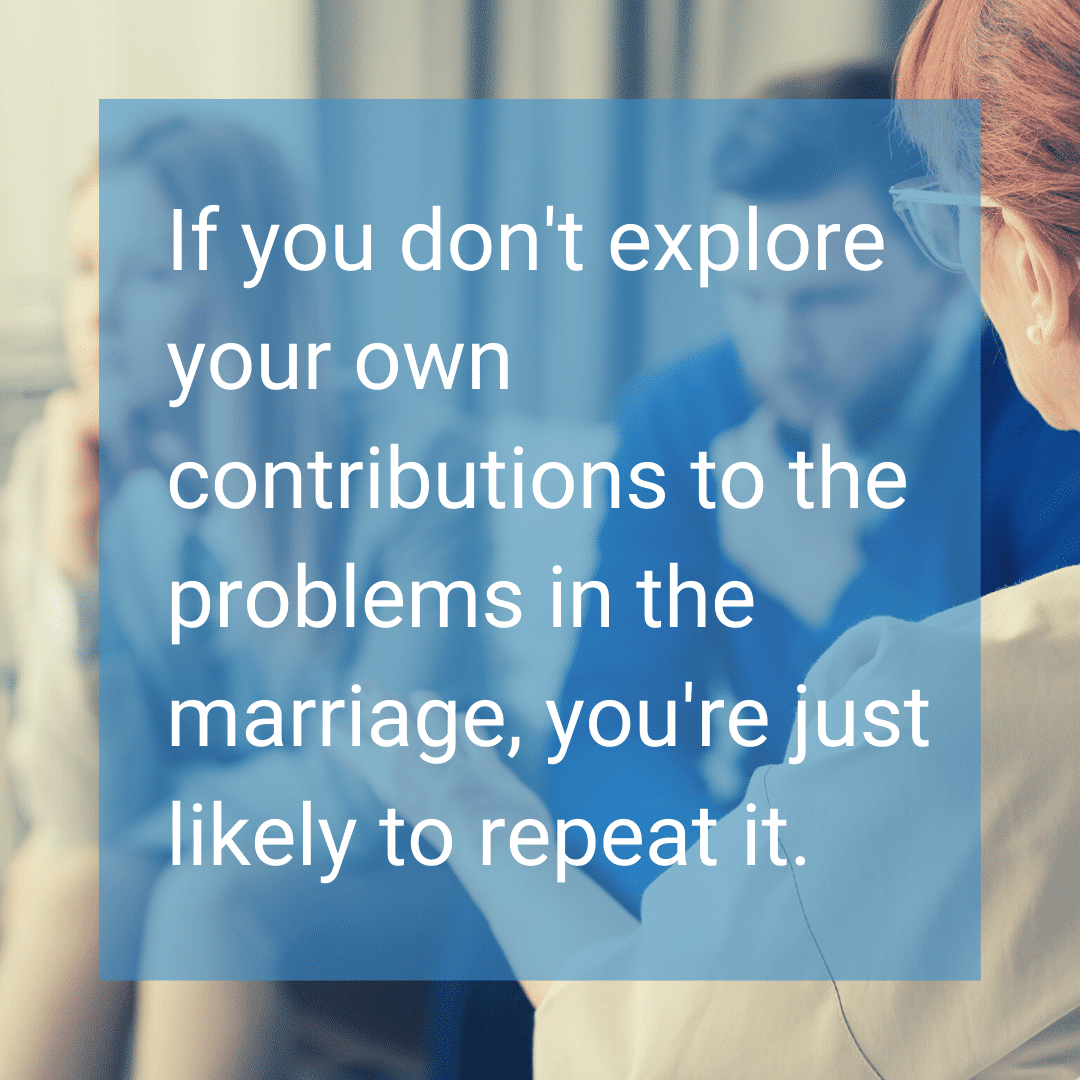 And if you have an active affair going on (no, we won't make you disclose that in Discernment Counseling...) repeating that same mistake might happen sooner rather than later.

The 'Leaning In' spouse's perspective

You knew there were problems, but leaving? That's not what you thought the two of you were made of. You're not a quitter. You can’t believe you’ve been betrayed like this when you’ve worked so long and so hard to keep the marriage together.

"You're going to leave?  Just like that?" After all this time and they are talking about giving up? Walking out on you and the family?

Is there an affair partner you found out about? Really? Her?  Him? It's so hard to be your 'best self' in a situation like that. Of course, you're hurt. Mad. Or cold and unresponsive. Betrayed, and deeply wounded. A whole host of negative emotions.

And not putting your best foot forward.

The "leaning in" partner" is usually terribly upset. They've just had the rug pulled out from underneath them with their spouse saying: "I'm not in love with you anymore..." or worse "I want a divorce." They may be angry, in mourning, frustrated, and just plain upset. Maybe have become abusive, placating, inconsolable or willing to "do anything" to make things better. Or acting in a variety of ways depending on the day...or the minute.

But you're not a "victim" and you've got work to do.

Know what is truly working and what's not.

Goals for the 'Leaning Out' partner

There are some pretty legitimate reasons for leaving a marriage

Can you own up to your part in any of them?

Or maybe less dramatic things. Emotional or sexual withholding that has gone on for years, even decades?

Discernment counseling isn't a "pity party" for those who want to hold onto their marriages. The therapist won't remain a passive listener to how you've been hurt and try to console you.

If you aren't willing to hear what your partner is saying about why they want to end the marriage, you're practically signing the divorce papers for them.

If you want to end it, then Discernment Counseling might be a single session of getting clear on that and deciding how to move forward.

But if you don't want out as well, the way you act from this point forward really matters. We know all the ways that simply don't work. Threatening, scolding, pleading, those don't work. We could go on and on, but how you choose to conduct yourself is what Discernment Counseling focuses on in your private sessions.

Goals for the Leaning In partner

What is the format of discernment counseling?

A Discernment Counselor spends most of the session time in individual meetings.  In an intensive, we'll see you individually for approximately one hour each and together for 3-4 hours.

Again, this is not marriage counseling, and there no debate or argument during this joint meeting time.

Keep in mind that one of you is leaning out of the marriage and nearly ready to go forward with a divorce. The other person may be ready to do whatever it takes to save the marriage.

There will be a lot to talk about. Calmly. Rationally. Seriously.

Many people need the time, space, and an objective, supportive therapist to provide a place to thoughtfully consider all their options.

And it's time limited, you will meet both individually and as a couple during each session.

The goal is to reflect upon, and consider the best course of action for you:

Why do discernment counseling?

Discernment Counseling is considered successful when partners have clarity and confidence in their decision. Once you've gained clarity and direction, you can decide your next steps with confidence. To learn more about this method of working, read this article Wall Street Journal. 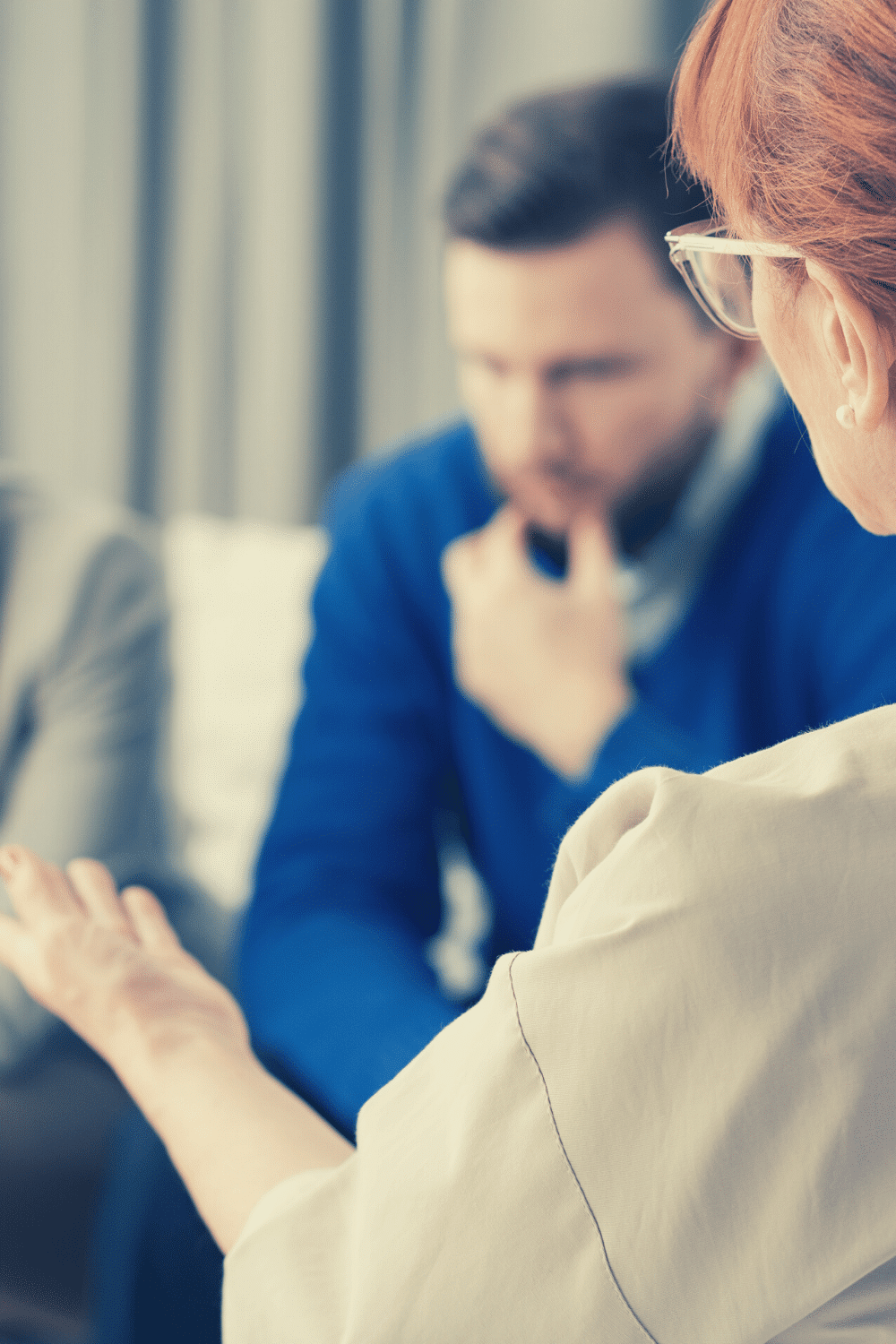 At Couples Therapy Inc., we start all Discernment Counseling with a State of the Union Assessment. This way, we are fully informed about the state of your marriage currently and can help you more effectively. Think of it as "pre-discernment counseling."

What are the expected outcomes of discernment counseling?

Path One:    Stay the same- Do nothing and decide later. (most people hate this path)

Path Two:    Make an informed, ideally mutual decision to divorce...a constructive divorce; you may then seek out divorce professionals to work with, such as divorce mediators.

Path Three:   Decide on a reconciliation plan to wholeheartedly work on renewing the marriage. It's a long-term six-month commitment, but a fully committed one.

In Discernment Counseling, you don’t have to be sure you want to remain married.

You don’t have to be convinced that you want a divorce.

There is no pressure to commit to any given path.

Discernment Counseling is done by an elite group of professionals with advanced training in couples therapy. Many have been approved to conduct his work by the Couples on the Brink Project, the group that originated this groundbreaking approach. Discernment Counseling helps the couple, individually, to decide if counseling is really the way to go.  Not surprisingly, marital therapy at that point, is of no help. This leaves the “leaning out” spouse even more convinced that divorce is the only viable option.

For this reason, discernment counseling can save thousands of dollars spent in marital counseling that is destined to fail.

Both of you can't ignore "the audience," if there is one. If you haven't told anybody, all the better. Don't, until you've complete discernment. You'll set off a flood of opinions that won't be neutral and won't help you to explore all the complex feelings safely and calmly.

Only they aren't in your situation, you are.

Unless they are Marital First Responders, from Bill Doherty and the Doherty Relationship Institute they are likely to make matters worse, instead of better. If you find yourself pulled by family, friends, clergy, divorce professionals, even an individual therapist who have only heard your side of the story, you may be getting well-meaning but competing advice, and you may also be getting more confused. None of it is "objective" unless they are trained professionals who have done a thorough assessment of your relationship.

It's a big decision: whether to give it one last try to make it work or whether to divorce. And it's a decision only you can make, and it's an important one.

No one wants to do half-hearted couples counseling: not your couples therapist, you, or your spouse.

Neither do we. Discernment counseling isn't marriage counseling. We make sure that if you do decide to go to marriage counseling, it isn’t a waste of your time and money. Like dragging your feet, not really wanting to be there, half-hearted attempts wasting...

We emphasize the importance of each partner recognizing their own contribution to the problems, and considering all the viable solutions, not just marriage counseling. Even if you do decide to divorce, knowing what part you’ve played in your marital troubles will be particularly useful to you in your future relationships.